My beautiful baby saved my life 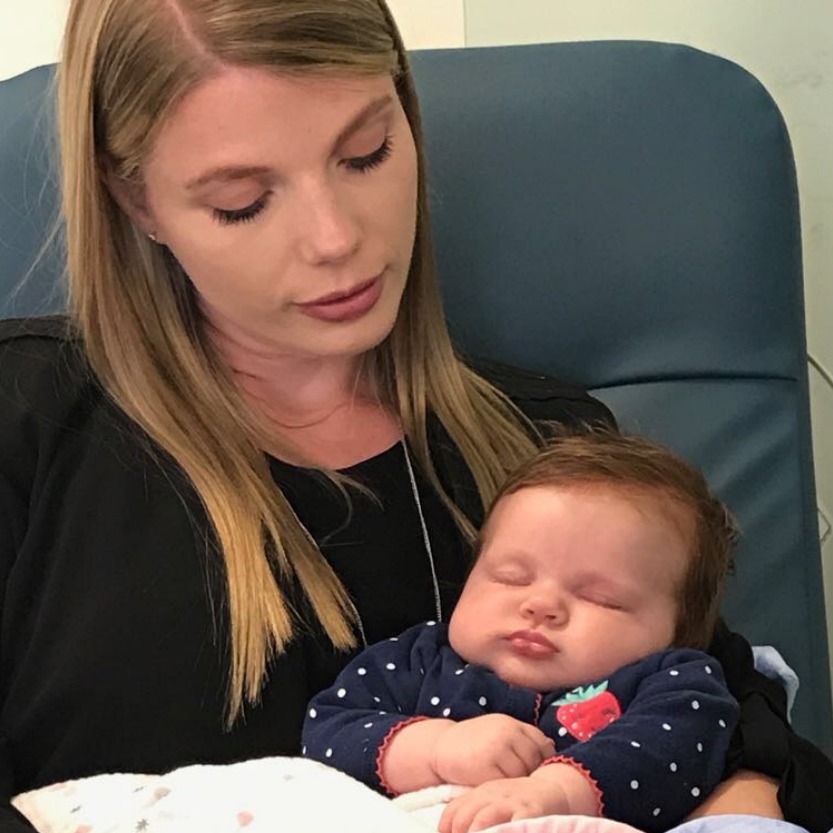 I remember sitting in the small room waiting for the doctor to come in.  I was nervous but didn’t think anything was wrong.  The doctor came in and asked how I was.  I gave my usual cheery response that everything was good but added that “it depended on what he was going to tell me…ha ha ha”.  I laughed but my jovial manner quickly subsided when my doctor sat down and the words “it’s not good” came out.  My heart dropped.  He then said, “It’s cancer”.  My heart dropped again.

I was 31 and eight months pregnant.  After feeling a lump in the shower, and having an ultrasound and then biopsy, I was diagnosed with invasive ductal carcinoma, grade 3 of 3, 1.5cm diameter, estrogen receptor positive, progesterone receptor positive, HER2 positive.

My immediate concern was for my little bundle in my belly, Sophia.  The doctors reassured me that everything was okay with Sophia and that the tumour wasn’t affecting her in any way.

Being diagnosed when I was pregnant definitely added extra complications to treatment.  I had originally planned to use a midwife for delivery; however, being high-risk meant I needed to switch over to an OBGYN quickly.  The second issue was that Sophia needed to be evicted from her current home early so that I could have surgery as soon as possible.

After a discussion with my surgeon over concerns for an immediate induction (more than six weeks early), he was happy to let Sophia stay in my belly for as long as I was waiting for the genetic test results, which bought me an extra four weeks.

My OBGYN was really great and was happy to wait to induce me until just a few days before my scheduled surgery – this meant that Sophia was only two weeks early and didn’t have to spend any extra time in the hospital.  This decision could have backfired had I needed to have a C-section or had complications from the delivery, but everything went smoothly, so my surgery date wasn’t affected.

In a way, I was lucky that I was diagnosed towards the end of my pregnancy as it meant I was able to deliver at full term.  Had I been diagnosed very early in my pregnancy then my options would have been completely different – I may have even had to have the breast surgery or start chemotherapy treatment while pregnant, which wouldn’t have been ideal.

A few days after I was diagnosed, I had a genetic test done to understand whether my cancer was hereditary or not.  The main genes tested for were BRCA1 and BRCA2 mutations.  Luckily, I was negative for the BRCA gene mutations, which was great news as this meant that I hadn’t passed the mutation on to Sophia.

I was induced two weeks before Sophia’s due date and all went well (once I had the magic pain relief anyway!).  I now had my special bundle in my arms and she was perfectly healthy.  I was scheduled to have surgery a couple of days post-delivery, but it got delayed a week as my genetic test results weren’t in.

My surgery went well, and I healed up nicely.  I was supposed to refrain from picking up Sophia for one-to-two weeks to give my stitches a chance to heal, but I challenge anyone to resist picking up their little newborn for such a long time.  I obeyed the doctor’s orders for the day of surgery – Simon, my husband, just popped Sophia on top of me for a snuggle that evening. After the first evening I couldn’t help myself and completely didn’t abide by the instructions.  I am usually a good patient and follow the doctor’s orders, but I felt like I was able to hold Sophia as she was so small and light.

I was luckily able to breastfeed for the first five days, which enabled me to provide Sophia with colostrum (an important part of breast milk for newborn babies).  After this, I developed mastitis and had to go on antibiotics to reduce the swelling in my breasts and get rid of the infection.  My lumpectomy surgery delay turned out to be a blessing as I needed the extra week for the antibiotics to work their magic and get everything under control so that I could have the breast surgery as planned.

Although I wasn’t able to breastfeed beyond the first five days, I was fortunate to receive breast milk from my local breast bank, NorthernStar Mothers Milk Bank.  Typically, this service is intended for premature babies where the mothers are unable to breastfeed due to the baby being too premature, but they made an exception for my situation and generously donated three months’-supply of milk.

Sophia and Simon kept me company for my chemotherapy treatments, but obviously weren’t allowed to be in the room during radiation treatments.

Simon and I have really great supportive family and friends that helped us through this journey.  My family all live back in the United Kingdom (except for my sister-in-law who is also in Canada), but they all took time out of their busy lives to come over (on multiple occasions) and help Simon and me out, which was just amazing.  Most importantly, I couldn’t have navigated my way through this “bump in the road” without the love and support of Simon; he is truly my rock, and one amazing dad!

Sure, it wasn’t ideal timing, but in a way, it was easier to deal with recovering from the surgery and chemo etc. while Sophia was so young as she slept through most of it.  Had I been diagnosed now that Sophia is 18-months-old and super active, that would have been a whole other level of exhaustion to deal with.

I am a pretty positive person and I truly believe that you can, and should, find a positive in any bad situation.  For me, I focused on my beautiful little girl who had saved my life, as had I not been pregnant, my tumour probably wouldn’t have grown so quickly for me to notice the change.  It’s not easy to juggle treatment with a newborn baby but Sophia was a great distraction from everything.

Throughout my journey, I was inspired to create a blog, and it has been very therapeutic for me to tell my story and share my experience and tips.  It will also serve as a good journal for when the time comes for Simon and me to tell Sophia the story about how she saved my life.

During my treatment, I often joked that life threw me this additional curveball as Sophia was such a good baby and I needed an extra challenge to deal with. While I didn’t love the challenge, I faced it head-on.  I am now cancer-free one year post-radiation treatment.  Life is looking good, and I am making sure to treasure each and every day that I have with Simon, Sophia, and Bertie, our adorable English bulldog.