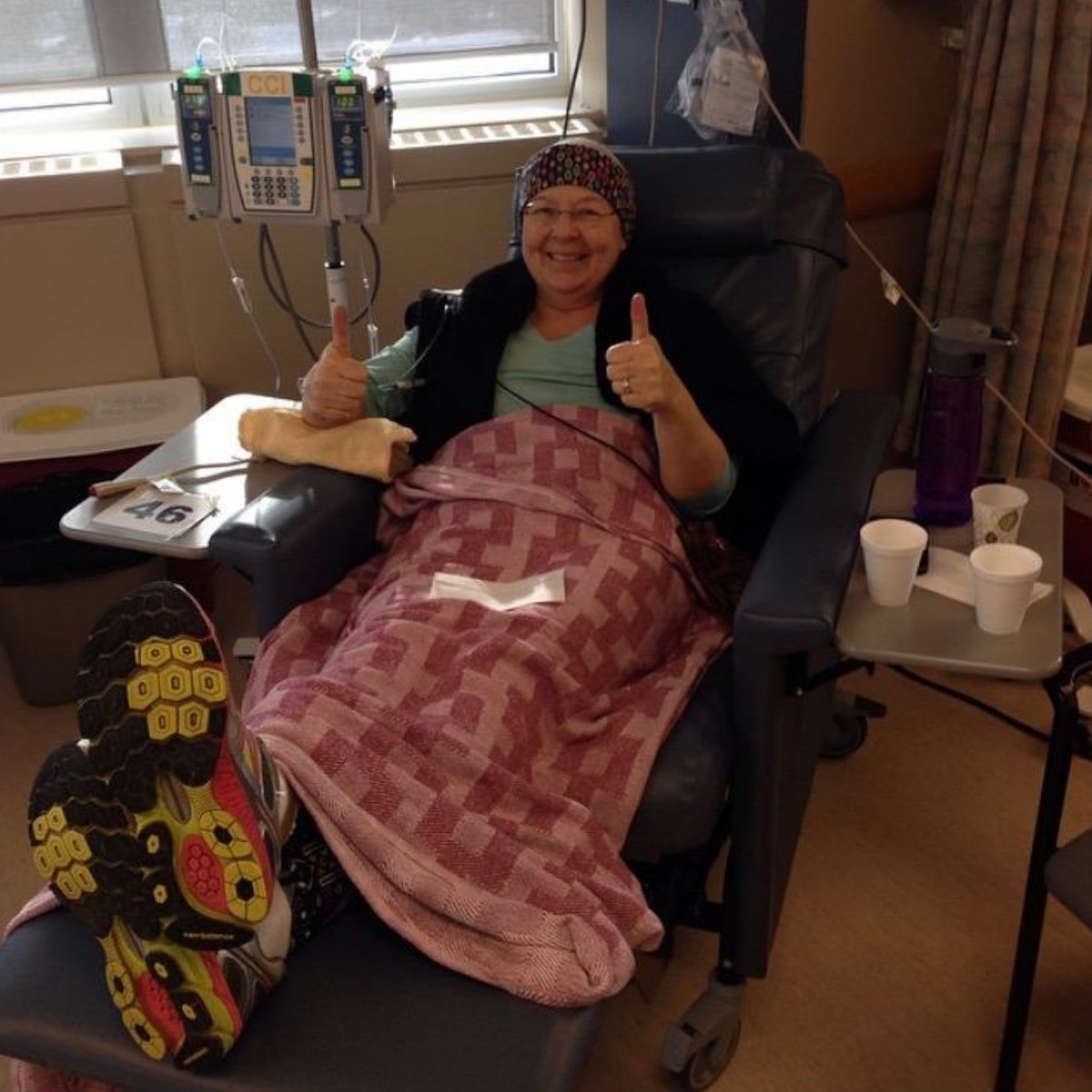 “Abject terror floating in the back of my head.” That’s how Shelley Moore of St. Albert, Alberta describes her reaction to her 2014 diagnosis of Stage II triple negative breast cancer.

Unlike other forms of breast cancer, triple negative breast cancer has no targeted therapies. Therefore, Shelley was very worried about the possibility of a recurrence.

A psychologist put Shelley’s fears in perspective.  “How would you feel if you spent two years, five years, ten years worrying and nothing happened?” the counsellor asked her.

“Nobody knows how long they’re going to live,” says Shelley.  “Other people may not think about death, but once you’ve had cancer, it’s very in-your-face that you’re not immortal.”

To increase her chances of survival, Shelley had a mastectomy in October 2014 and started four cycles of chemotherapy in December of that year. An extensive lymph node dissection revealed no cancer in the lymph nodes, which Shelley celebrated. “I bawled.  A weight was lifted off my shoulders,” she says.

In addition to conventional treatments, Shelley adopted a healthy lifestyle, including a plant-based diet, increased physical activity, low stress, no smoking, and no alcohol.  She also took herbal supplements and acupuncture.

In addition, she joined a California-based study that, using blood tests, assesses levels of natural killer cells and looks for DNA of circulating tumour cells.  “That’s comforting to me because they’ll have data about how my body is responding as well as contributing to the future—maybe these tests will lead to a breakthrough for triple negative breast cancer patients.”

Shelley had discovered a lump in her breast in September 2014 and arranged for a mammogram, ultrasound, and core biopsy all at the same time.  She knew to ask for this because she is a retired-x-ray technologist.  Not all clinics offer this same-day service, so if yours does not, Shelley advises you to find another clinic.

Overall, Shelley was pleased with her care at the University of Alberta Hospital and the Cross Cancer Centre in Edmonton.  “I believe the Canadian health care system was there for me when I needed it,” she says.

She especially appreciated the assistance of her nurse navigator, Debbie Benoit, who arranged for prompt treatment and helped to allay her many concerns.  “I called and emailed her a lot.  She calmed me down; she responded to my countless questions regarding treatment options.”

Shelley feels especially fortunate that she chose to have a mastectomy because after surgery, an 8 cm area of lobular carcinoma in situ was discovered in her breast; the area of LCIS was not visible on an x-ray or ultrasound.  While not cancerous, LCIS increases the risk of a future tumour.

She appreciates the skill of her surgeon, who removed 22 lymph nodes. Lymphedema could have been a consequence.  “My surgeon is amazing.  She told me there were no restrictions on using my arm,” she says. “I followed her directions; I don’t have lymphedema. I stretch, move, lift using both arms equally.”

She was disappointed in her family doctor, however.  He was on vacation when the cancer diagnosis arrived at his office, so he had his clerk pass on the news to Shelley.  “That was appalling,” she says.  “That would be one of the worst examples from the medical system.  He’s no longer my family doctor.”

On a more positive front, Shelley appreciated the support of her husband, daughter, son, and friends.  Her daughter even shaved her head in a show of solidarity. “She attended all appointments and chemotherapy sessions with me,” says Shelley.

In February 2016, Shelley began the process of breast reconstruction using tissue expanders and implants.  She also had her other breast removed to reduce her fears of recurrence even more.

While the fear of recurrence lingers, “I’m doing the best I can,” says Shelley.  “All you can do is manage it and pray.  And that’s what’s motivating me to eat well and live healthy.”