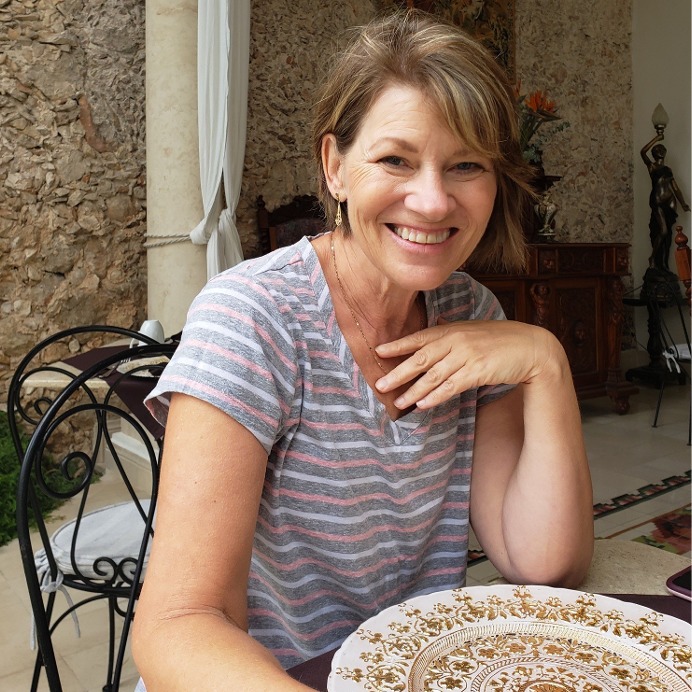 I would have never thought that I would be telling my story to a large group of people but today I consider it an honour.

For the past 26 months I have appreciated everyday of being alive, of growing older, of celebrating birthdays and of seeing the wonderment of my grandchildren experiencing new things. I try not to complain too much, I always used to complain about having bad hair days and how I wished I could go bald. Not now, I love the fact that I have hair again, that I have eyebrows and eyelashes.

My cancer journey started March 2017 when I was called back after my regular scheduled mammogram to have another mammogram at the hospital so they could check an area that looked suspicious. I went to my doctor a few days later to find out the results showed a fine cluster of micro calcifications. I then asked him about doing a biopsy but was told there wasn’t a lump and that we just needed to keep an eye on it. I was to come into the office for monthly breast exams and another mammogram would be scheduled for 6 months.

I had a feeling in my gut that something was wrong, so the next month I again asked for a biopsy to be done but my family doctor of 25 years explained that a needle biopsy could not be done as there was no tumor. They would need to do it surgically and that could leave scar tissue which might hide a lump.  So again, I went away being reassured that we were ahead of the game. Every time I mentioned to my immediate family and close friends that I felt something was wrong, I was told not to worry, everything was ok.

It was 2 months later that I found a lump where the calcifications were pictured. Another mammogram and ultrasound were ordered and this time the radiologist who looked at the image came in and asked if she could do a biopsy. Finally I would know, one way or the other. July 10th, 2017, I received the news I was dreading, the next day I would meet with the surgeon.

My daughter came to the appointment with me which was such a blessing as I only heard a few things. Even though I knew I had cancer it was such a shock and my mind was everywhere. He did question why the 1st radiologist didn’t do an ultrasound as I had dense breasts. What the heck did that mean? Well I now know that cancer tumors are hard to see because they are white, the same colour dense breast tissue shows when looking at the image, therefore, making it harder to spot. He told me that I needed to have an MRI to see if the cancer had spread to my right breast in case I needed a double mastectomy. I ended up having my left breast removed along with 19 lymph nodes of which 18 were cancerous.

How could I be so far ahead of the game as told by my doctor back in March? My point is if you think something is wrong you NEED to be your own advocate. You know your body better than anyone else. I should have not left his office without getting a biopsy. I should have asked “Do I have dense breast tissue?”. But at that time I didn’t even know what it meant. Could it have made a difference being diagnosed with stage 1 or 2 instead of stage 3 cancer? Would I then not have to deal with lymphedema because of all the nodes being removed?  These are things that I regret but hopefully talking about it will educate other women. Women should know that dense breast tissue complicates your diagnosis and requires additional screening.

After my diagnosis everything moved quickly. I had my surgery in a week followed by 8 cycles of chemo, 13 cycles of Herceptin and 28 sessions of radiation. I cannot say enough about the amazing nurses who showed nothing but compassion, the radiation technicians who were always so gentle and my oncologists who answered my many questions and gave me hope.

For a time I questioned “Why me?” I did everything right -I exercised, I ate healthy, I had my children young, I breastfed, I didn’t have hormone replacement therapy, I didn’t drink excessively. Then it hit me, “Why not me?” Cancer chooses whoever it wishes- healthy, unhealthy, young or old. I found this disease was just as hard emotionally as it was physically. My emotions have and still do go from being grateful and blessed to angry and sad. One of my coworkers, who herself is a cancer survivor of 20 year plus, talked to me about how important your mind is in winning this battle. You need to be strong and fight but also you need to acknowledge your feelings. It’s okay to cry, it needs to come out. I spent quite a few sessions with the counsellor that the B.C. Cancer Agency provides, both privately and in group sessions. We are fortunate to have this service available to us especially if you don’t have much support and are feeling alone.

Myself, I have been blessed with a husband who refused the possibility that I could die, he was and still is my anchor. My 3 beautiful daughters who took me to appointments, to chemo, who cooked meals and cleaned my house. Before I got sick I had scheduled my holidays as the 2 oldest were expecting and the youngest was having shoulder surgery. I was supposed to look after them but now they were looking after me. I’m sure that all the cuddles I got in with newborn babies was just as effective as the rest of my treatment. My son who gave me the gift of music. He composed 8 piano pieces, one for each chemo session. It is recorded and he is hoping to use it for breast cancer fundraising.

I have been blessed by my extended family and countless friends checking in, sending encouraging texts, going for walks, making food and always listening to my never-ending cancer dilemma. I cannot thank you enough.

I am so lucky to be part of a medical system that has newer and better drugs, by the research that is taking place. None of this would be possible without the money that is raised. I remember going in for chemo and seeing the poster for Run for the Cure, I made a goal that I would do this run and raise money. Here I am 2 years later being able to run 5k. It’s amazing how fast your body can heal.

I met a wonderful woman at the Victoria Cancer Clinic (I sometimes think she was an angel) who was having her 75th session of Herceptin. She had been diagnosed with stage 4 breast cancer 4 1/2 years ago and I couldn’t get over the fact of how well she was doing. We talked for a while, I found out that she was the same age, she was still working and she had just come back from Haida-Gwaii. I asked her if she was in pain, her reply was I have sore joints in the morning but I just get up and start moving. She was still here living her life with zest because of new and better medication.

I have always been afraid of my cancer reoccurring and I think I need to do everything possible to stop this happening. I shouldn’t eat sugar, I shouldn’t eat anything processed, I shouldn’t drink wine, I should eat more vegetables, eat less meat, drink more water, go to more yoga classes, meditate more, journal more. But what I learned from my angel is that even if the cancer should come back, that we will all pass at some time and what I really need to do is to live life and to live it to the fullest trying hard not to dwell on the past or be anxious about the future.

So at that I will introduce the Moment.

Today we prove that whoever you are, and however this disease may have touched your life, together, we are a force-for-life in the face of breast cancer.

Right now, thousands of people are united across the country by their promise to support the breast cancer cause.

Together, we are bigger than breast cancer.

Together, we are bigger than breast cancer!

Sean Patton, Janice’s son, composed a stunning solo piano album which was written for Janice while she underwent chemo treatments for breast cancer. You can download this beautiful album and email the album directly to your loved one, sharing the gift of music. You will also be supporting others with breast cancer as all proceeds will go directly CBCN.