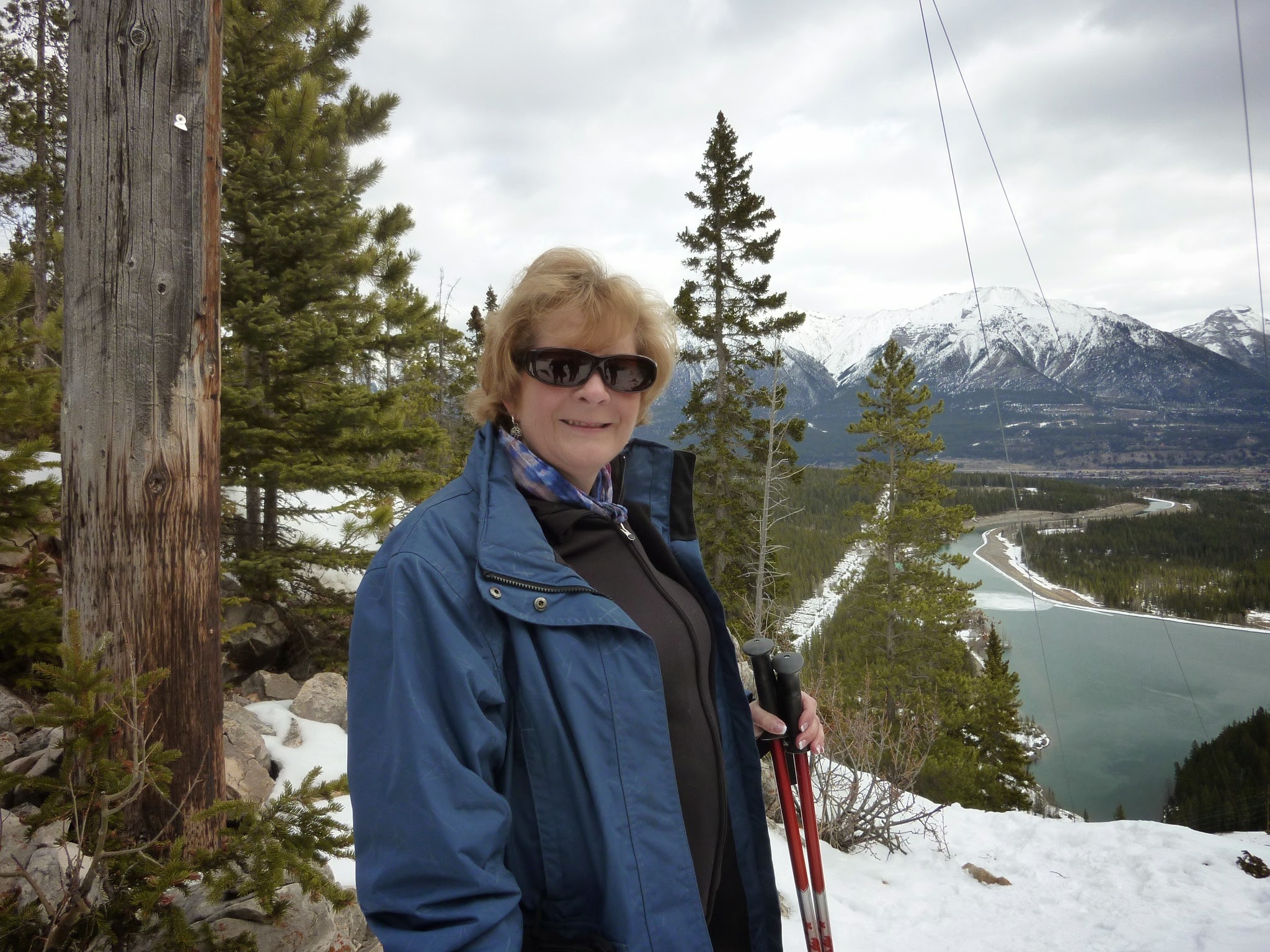 In 2003, I was a happily married, active, stay-at-home mom in Calgary, Alberta, where I was born and raised. I was 46 years old and filled my days going to the gym to work out, volunteering at the school and church, and running an active household. My son was 13 and my daughters were 11 and 8 at the time. I felt healthy and not overly stressed.

After my annual mammogram, I was sent for a biopsy and found out I had estrogen receptor positive invasive duct carcinoma. A breast surgeon performed a lumpectomy and sentinel node dissection; then I had sixteen rounds of radiation, which went well. I am very fortunate that I live close to the Foothills Medical Centre and Tom Baker Cancer Centre, where my treatment was done.

I returned to my regular activities and eventually forgot I had breast cancer. My five-year anniversary of being cancer-free came and went without fanfare and I thought I was done with cancer.

I continued with my regular mammograms and in December 2008 found out I had the same type of cancer in the same location in the left breast. This time I had to have a mastectomy and chemotherapy. After the treatment, the oncologist put me on Tamoxifen for five years.

Losing my hair was emotionally difficult and I didn’t allow anyone to take a photo of me bald or even with a hat while I was on chemotherapy. The rest of the side effects were manageable. I attended weekly Tai chi classes and received healing touch, which I believe helped reduce the side effects.

Because of the recurrence, I was referred to the genetic clinic and was asked to make a detailed family history of illnesses and causes of death. Since only one cousin had breast cancer after my original diagnosis, the counselor said that there was no reason I should be tested for the BRCA gene mutation, and I was fine with that.

I wore a breast prosthesis and hated it. In 2010, I saw a plastic surgeon and we decided on reconstruction with an implant. It was a long process involving a tissue expander, implant, and latissimus dorsi flap transfer, but the end result was amazing and I am very happy with my breast now. I had a mastopexy on the right breast so the breasts are symmetrical.

In 2011, my dad, who was 89 at the time, noticed a change around one of his nipples. He was sent for a mammogram and found out he had Paget’s disease, a form of breast cancer. He had a mastectomy and was referred to the same oncologist I had gone to. The oncologist said because of his age, he wouldn’t need any other treatment.

However, the topic of genetic testing came up again. This time the genetic counsellor felt it would be reasonable to find out if I had the BRCA1 or BRCA2 gene mutation. I also wanted to know if my daughters, ages 15 and 18, carried it.

After a nine-month wait to get the results, I found out I do not have the gene mutation, which was a huge relief. Further testing on my father or my daughters was not required. My daughters have been advised to have mammograms around age 36, which is ten years before my first diagnosis at age 46.

Interestingly, my dad’s sister (my aunt) had a breast cancer diagnosis as well. That now makes four of us on my Dad’s side of the family.

After the mastectomy and reconstruction, I returned to all my regular activities. I joined Sistership, a dragon boat team of breast cancer survivors, went to yoga classes twice a week, and took courses in healing touch. I volunteered at my church and was still actively involved with my children.

I always had problems with lower back pain due to arthritis, but in 2013, it started getting a lot worse. I also had pain in my hip area. I mentioned it to my family doctor several times and he just brushed it off as being from arthritis, aging, and exercising. Knowing my breast cancer history, I asked him if it could be cancer in the bones, and he said “No, it doesn’t show up in your blood tests.” I later found out that bone metastases do not show up in blood.

Finally, I asked him if he could send me for a new x-ray to find out if the arthritis was increasing. The results of that x-ray showed I had large lytic lesions in my pelvis and sacrum, indicating metastatic disease. A full body bone scan revealed that I also had bone metastases in my spine involving several vertebra as well as several rib fractures. A CT scan showed I had two lesions in my liver.

I was absolutely shocked by the results of the tests.

I was on Tamoxifen, kept active, ate well, and felt healthy. My oncologist said “I guess the Tamoxifen didn’t work, so now you don’t have to take it anymore.” He put me on oral chemotherapy called Xeloda (capectibane) and I started going for infusions of Zometa for my bones.

I wondered, “What did I do wrong?” I thought it was a death sentence and my oldest daughter had severe anxiety about the diagnosis. My husband tried not to show how upset he was.

I had to stop all physical activity except for walking, which was painful. The pain in the left side increased so much that even morphine wasn’t helping much.

Finally, I went for a consultation with the radiation oncologist for the pain. I knew that I was at high risk for fracture due to the extensive damage in my pelvis, but I didn’t realize how much until the radiation nurse told me I could fracture my pelvis getting on and off the toilet. Yikes, if I fell on my butt, it would be tragic.

I had my whole summer planned around dragon boat practices and festivals. It was my passion and I developed wonderful friendships with some team members. Giving that up was very difficult for me, but I had to accept the fact that I couldn’t paddle.

I had been doing a regular qigong practice, and in September 2013 attended a three-day workshop with a qigong master. I realized a couple of days later that the pain in my pelvis was completely gone. I stopped taking the morphine because I no longer needed it and haven’t taken any since. That was extremely remarkable and a testimonial that qigong works.

I joined a weekly support group called BEST (Supportive Expressive Therapy for Metastatic Breast Cancer) which is facilitated by psychologists from the Tom Baker Cancer Centre. I find the emotional and mutual support from the other participants very helpful.

I am also grateful for the programs and support of Wellspring Calgary. I attend a weekly tai chi class and have participated in a variety of other programs, movement classes, meditation, discussion panels, workshops, and much more.

A year and a half later I am feeling well.

The lesions in my liver are gone and I have not had any progression in my bones. I stopped taking chemotherapy because it was affecting my vision and am on Letrozole. In addition to tai chi, I continue practicing qigong, yoga three times a week, and other exercises for strength and cardio. I continue to be involved in healing touch and volunteer in various capacities at my church. I enjoy traveling with my family and friends.

I live by the Meaningful Life Therapy motto: “Even though I am ill, I will not live like a sick person” (Dr. Jinroh Itami) and strive to make each day the best it can be. I am a firm believer of living mindfully and to enjoy living in the present.

My intention is to live many more decades. My dad is now 93 and my mom just turned 88 years old. Longevity is in my family, so I have to live up to that!

Waking up this morning, I smile,
Twenty four brand new hours are before me.
I vow to live fully in each moment
and to look at all beings with eyes of compassion.

I feel very fortunate that my cancer has been pretty stable since I wrote the original article.  I had a bit of a scare in March of this year when I found out I had three new metastases on my skull.  One of them was causing a headache that wouldn’t subside with pain killers, so I had some targeted radiation to that area.  The treatment was successful and the pain has not returned.  I am still on oral chemotherapy and continue to go for CT and bone scans every three months.