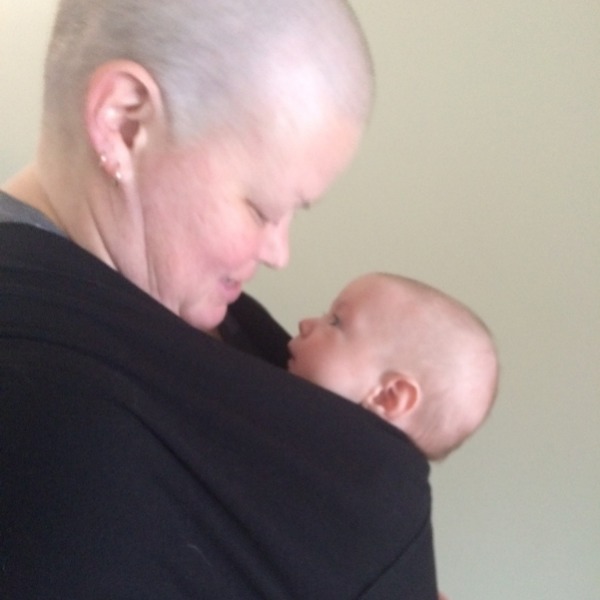 In August 2015 when Tanya Figg of Coaldale, Alberta was six months pregnant with her second child, she was diagnosed with Stage III invasive mammary breast cancer.  Her immediate thought was “what did this mean for me and my family?”

“Life changed,” said Tanya. “My husband and l, along with family, went from guessing the gender of our baby to questioning whether the baby and I were going to live.”

In every treatment decision she made, Tanya, then age 37, had two rules: “Cancer would not control my life and it would not take away the innocence of my children.”

She and her medical team at the Tom Baker Cancer Centre in Calgary had a long discussion about possible treatments.  Tanya reviewed medical journals and concluded that the benefits of neoadjuvant chemotherapy outweighed the risks.

Chemotherapy started in September 2015.  When her hair fell out as a result, she got down on her knees with her two-year-old daughter, Anabella, and explained that she had a new hairstyle.  “My husband, Paul, and I were very open with her.  We wanted to keep things as normal as possible .”

Tanya would attend the local hospital accompanied with her daughter twice a week for blood work. Laboratory staff gave Anabella a syringe so she could play doctor and help take care of her mother.

The cancer treatments were exhausting, but whenever Tanya had energy, she would spend time with her daughter.  Together they built a snowman, go for a little walk or play on the swings at the park.  They would also take afternoon naps, read books, and do art projects.

On November 19, 2015, after 35 weeks of gestation, Tanya delivered a healthy 5-pound, 12-ounce baby girl, whom she named Gabrielle. The delivery was scheduled between chemotherapy treatments when Tanya was at lower risk for infection.

It truly took a community to help my family go through cancer.

“I felt every emotion, from grieving the loss of not having a normal pregnancy to relief in seeing that my child was perfect and healthy” said Tanya.

The next step in treatment was a lumpectomy in March 2016, followed by a mastectomy in April when cancer was discovered in other areas of the left breast.

The final treatment was radiation, which finished in July 2016.  Anabella was alarmed by the sore, red area on her mother’s chest, crying for Tanya to go to the doctor.  Tanya explained that she had an owie  but had special cream and bandages and that the doctors were taking care of her.

Snuggle time was especially important for Tanya and Anabella. So, with each surgery and radiation, Tanya had to explain that her left side was sore and they created a new snuggle.  Tanya also had to be careful how she held and burped her new baby.

If it takes a village to raise a child, “it truly took a community to help my family go through cancer,” said Tanya.  A wide range of friends and family members helped with tasks such as cooking meals, cleaning and providing childcare. Tanya’s mother had a significant role in supporting her and her family through treatment.  The goal was to have minimal disruption of her daughters’ routines and to have consistent caregivers for them.

Going through treatment, the most important lesson was how much she cherished the simple joys of family life, such as the opportunity to build a snowman with Anabella.

Tanya’s treatments are now complete. Looking back, she said “While there have been difficult times on this journey, I can say I made it!  I am grateful for the many silver linings and wonderful people that have come into my life this past year. This journey is far from over, but today I can say there is a happy ending.”