Laughter Really is the Best Medicine 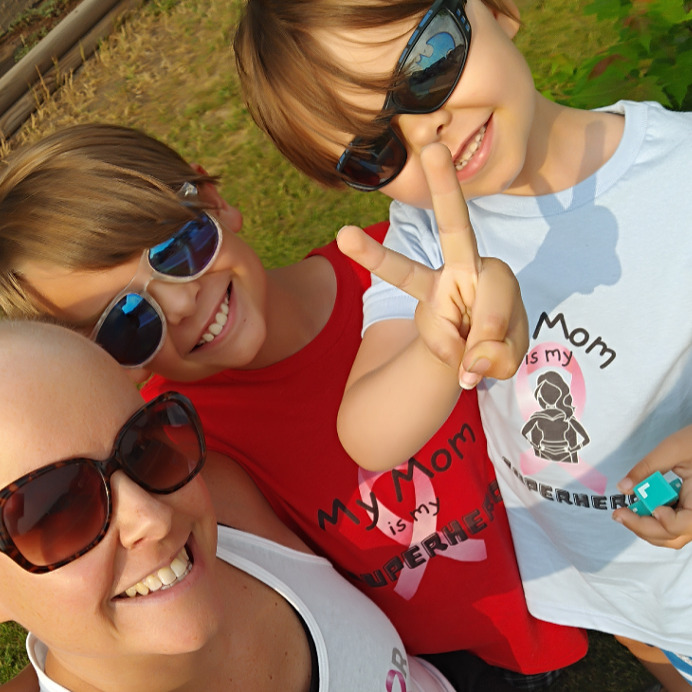 When faced with the worst moments of life, we have two choices: lie down and die or stand up and fight. This was never truer than when I received my breast cancer diagnosis. I knew I had no other choice than to fight it with a smile on my face and as much positivity as I could muster – even if I had to fake it to make it, as they say. My boys looked at me with fear in their eyes and sadness in their hearts. This would be a defining time in their lives. I was (and still am) determined to make it a teachable moment: how to face life’s adversities and how your mindset can change everything, a lesson we could all learn.

“Hey, at least I’ll get a new set of twins outta the deal.”

The silver lining for a middle-aged divorcee.

Being small chested, I had often contemplated breast implants over the years, especially after two children, being almost 40 years old and recently becoming single after over a decade of marriage. My cancer diagnosis gave me the push I needed to plan for the bigger, perkier breasts I had always wanted. Sure, I had to remove the ones I had first, but cancer couldn’t have all the fun! And think of the new wardrobe that would follow. When I met with the plastic surgeon to “try on” my new pair, it was the first moment of actual excitement without the underlying current of fear that I had had in months.

That initial glimpse of a silver lining set the tone for how I would walk through this journey with laughter and a positive attitude.

“Mommy, are you gonna lose your hair on your no-no square?!”

Oh, from the mouths of babes.

I would like it noted that I have no idea where my kids got the term no-no square, but I think it adds that extra touch of something special to this particular moment in time. We were going for a walk around our block, as we do every night. It was early spring with beautiful weather. Our neighbours were all out enjoying the sunshine. Chemo would be starting in a week, so I was trying to explain to my boys that I would lose my hair. Of course, they had so many questions – will I lose my brows and lashes, what about my arm hair, and so on. We walked in silence for a few minutes as they thought about all that I had told them. When my four-year-old suddenly stopped, turned to me wide-eyed and asked (you guessed it), “Mommy, are you gonna lose your hair on your no-no square?!” I tried to shush him, which only made him question me more. He was insistent like only a four-year-old can be, that I give him an answer. I know my neighbours overheard this little interaction, the smirk across their faces said it all. After I started losing my hair, I couldn’t walk past them without turning some shade of red. I was certain that conversation was on repeat in their mind at the very sight of my balding noggin.

“Get yourself a lint roller, or four.”

…also known as the number one piece of advice I would get during my journey.

Losing my hair was an awful thought that brought me to tears more than once. In some ways, it felt like a bigger loss than the loss of my breasts. I remember talking to another breast cancer survivor about starting to lose my hair. When I mentioned my plan to shave my head, she immediately suggested I stock up on lint rollers. Although I didn’t really get why, I heeded her advice. And thank goodness I did! I lint rolled everything – and I do mean everything. That thing rolled across my head to stop those little needle hairs at the source, across my neck and shoulders, and even rolled across my pillow daily as part of my bed-making routine. Now when they say you will lose your hair, they mean ALL your hair. And I did (except my leg hair, I’m still upset about that let down – I was promised no leg shaving over summer, and chemo did not deliver on that promise). However, chemo did deliver on the free Brazilian promise, albeit not all at once. And let me tell you, that lint roller came in handy there too. I stood in the bathroom buck naked, lint roller in hand, looking like a nearly hairless cat. As I silently prayed that my kids wouldn’t walk in at that moment, I shrugged and went to town rolling that sticky paper every which way until the hairs that were barely hanging on finally let go of their tiny (yet annoyingly painful) grasp.

They say laughter is the best medicine. If I take away nothing else from this journey I’m on, I hope I take away that. Because it is the truth. Finding those moments that I can laugh (even if it’s sometimes through tears) has helped me stay strong mentally and emotionally which ultimately has helped me stay strong physically. Even on the worst days, I remind myself that I am not this moment, tomorrow will be better.

If you take away one thing from my story, let it be the ability to always find your silver lining. And remember, you are not this moment either.